First lady Melania Trump, much like her husband, is operating as though he didn’t lose last week’s election: She has yet to reach out to first lady-elect Jill Biden, a source familiar told on Tuesday.

On this day four years ago, Melania Trump had tea at the White House and a tour of the executive residence, at the invitation of then-first lady Michelle Obama, as is customary.

But this time around, any movement towards a transition of the East Wing and the Executive Residence has not begun.

Instead, another source with knowledge of Melania Trump’s daily schedule said there is very little in the way of change taking place at all, and most of the focus of the first lady’s office remains on day-to-day meetings and upcoming holiday planning. 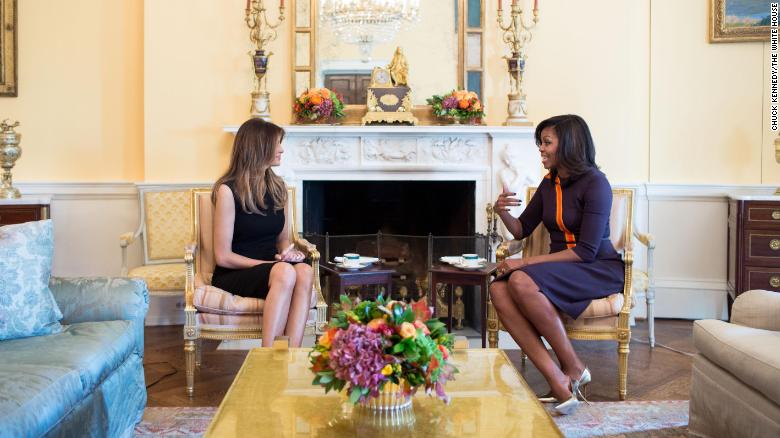 “It’s my understanding that it’s business as usual in the East Wing,” said the source. The source said that even if Melania Trump wanted to begin the process of a transition, the first lady is still hamstrung by President Donald Trump’s baseless refusal to accept Joe Biden’s victory.

“I’m not sure it’s fair for anyone to expect them to start transitioning when the President has not yet conceded,” the source said.Anita McBride, who served as Laura Bush’s chief of staff, who noted that Melania Trump has occasionally acted or expressed opinions different than her husband, said: “This moment is more complicated.

Her reaching out before he has conceded could be seen as going completely against what the President and the administration are doing.”

The source familiar with Melania Trump’s thinking says when the time does come to acquiesce, the first lady will comply.

“If the President concedes, I’m sure the East Wing will be gracious and professional to the incoming administration, that’s just how they work,” the source said.

For every day that passes without transitioning, however, the job of readying the White House for a new first family, and moving out the current one, becomes more difficult. 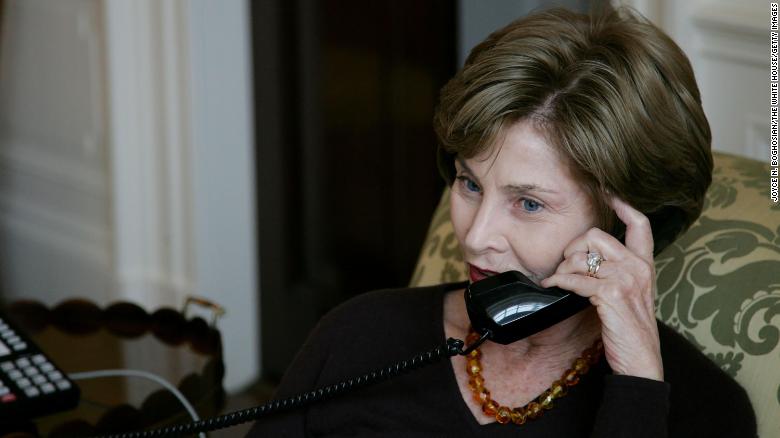 Biden is familiar with the White House and extremely capable,” said Capricia Penavic Marshall, who served as special assistant to Hillary Clinton when she was first lady, and then as the Clinton’s White House social secretary, and is the author of “Protocol: The Power of Diplomacy.”

Marshall was with the Clinton administration for its entirety and recalls clearly the importance of adhering to a tight schedule for the days between election and inauguration.

“By now there would have been at least a conveyance of notes between the current East Wing and the first lady-elect’s team, to talk about dates and schedules and what needs begin to take place,” she said.

“There is a timeline to all of this, and what’s happening now is just going to jam it up.”Among other things in a tight laundry list of to-do’s, there is the planning for organizational changes, moving trucks, tidying up and the literal measuring of the drapes.

Inauguration Day is a to-the-minute choreographed event, displacing one family and setting up the next, down to stocking the refrigerators and unpacking a first lady’s clothes into her dressing room.

McBride was part of the Bush team who were forced to wait until the vote between Bush and Democrat Al Gore was settled by the Supreme Court.

“We could only begin the transition to the White House after December 13,” she said. “It worked. It was frenetic, but it worked.”

For first ladies, the awkwardness of surrendering their (temporary) home and staff they have come to know and rely on to a new President and first lady isn’t always easy.

In particular, there was a well-known frostiness between Rosalynn Carter and Nancy Reagan, two women who were fiercely loyal to their husbands. The transition for Carter and Reagan was not a pleasant one.

“Rosalynn grew even angrier when rumors circulated that Nancy Reagan wanted the Carters to move out a few weeks before the inauguration and live in Blair House, across the street from the White House, so that she could begin redecorating the family’s private quarters,” Kate Andersen Brower wrote in her book, “First Women: The Grace and Power of America’s Modern First Ladies.”

“Rosalynn said that Nancy called her to deny reports that she wanted them out. ‘I don’t know whether she said she was sorry or not,’ Rosalynn said. ‘She just said she did not make those statements.’ “

Barbara Bush, too, was not happy to be moving out after one-term, yet she was gracious and insightful when Hillary Clinton came to the White House after the election for the traditional tea.

“Mrs. Bush took Mrs. Clinton up into the residence and through her dressing room to show her the window she would look through, across the Rose Garden, to see into the Oval Office,” said McBride, recalling the congeniality of the visit.

“She told her she would look through it whenever she was missing George during the day.” The “secret” window has since been shown to every first lady since by her predecessor. 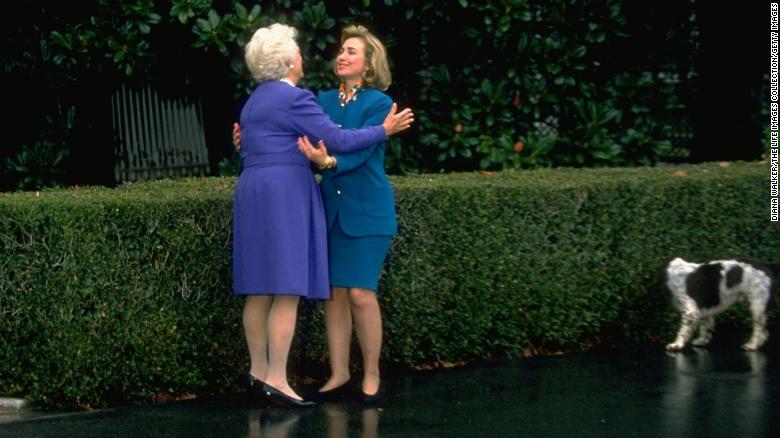 It isn’t just the first ladies themselves who have benefited from kind and helpful and open transition periods. “It’s not just Laura and I, it’s not just President Bush and President Obama, but it’s our staffs,” said Michelle Obama in 2015, as recounted by Brower in her book.

Obama added: “My chief of staff continues to talk to Laura’s former chief of staff on a very regular basis and it’s that kind of sharing that prevents us from re-creating the wheel, allows us to build on the things that are already working so that the country gains as we transition from one party to the next.”

McBride said she invited Obama’s staff members to join them in the office for a day or two, so they could work side-by-side and show in person how everything worked.

When Marshall arrived with her team to start the work of the Clinton administration as a special assistant to Hillary Clinton, she saw none of the tension or acrimony the country is witnessing now between the Trump administration and Biden.

“It was so supportive,” she said of the Bush East Wing staff behind-the-scenes. “My predecessors and all around the White House complex people were leaving us bottles of champagne and nice notes and binders and binders of helpful information.”

The traditional welcoming of the first lady-elect to the White House holds a different meaning than for the President and President-elect. For a first lady, though archaic, part of her role is to explain the workings of the White House as a home for a family.

It’s for her to instill advice about living there with children, as Laura Bush and her daughters did for Obama and her daughters, showing them how to wave from the Truman Balcony or slide down the sloped hallway near the private movie theater.

The image of Melania Trump and Jill Biden enjoying tea this time, if that day does come, will likely carry with it more scrutiny, given the weeks of bitterness.

“It could be awkward, but that moment will bring a bit of a collective sigh of relief to everyone else,” McBride said. “That visual of the two custodians of the White House, of the home … will resonate.

That image does help to chip away at some of the acrimony of the politics.

Even in the most divided races America has seen between presidents, there has until now, remained at least a thread of country over party, and a willingness from one side to help the other find its footing. 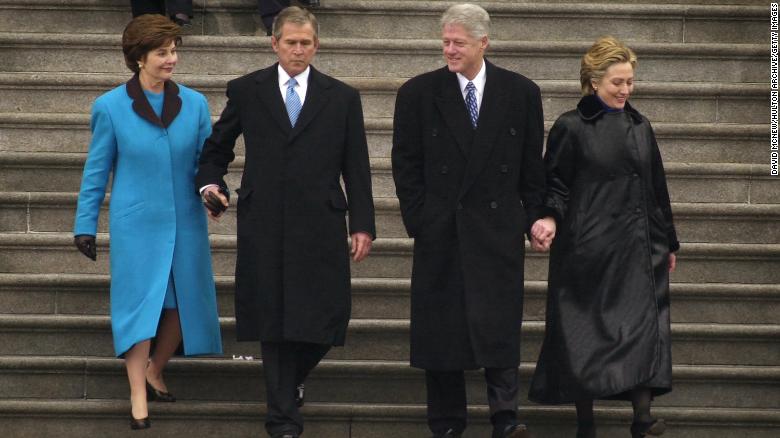 “That’s what is so beautiful for our country. That moment on Inauguration where one family says to the next, ‘Welcome to your home,’ ” Marshall said, recalling one of her favorite memories of that day, as the Bushes arrived to the White House to ride with the departing Clinton’s to the United States Capitol for the swearing-in ceremony.

“Right before they went out to their car, they put on their overcoats, and Clinton reached over and straightened Bush’s coat on his shoulder and said to him, ‘Come on, let’s do this.’ And Bush gave him a smile and a little look that clearly said, ‘Don’t worry. I’ve got this.’ “

Complete Guide on How to Produce Toilet Wash