In economics, factors of production, resources, or inputs are what is used in the production process to produce output—that is, finished goods and services. The utilized amounts of the various inputs determine the quantity of output according to the relationship called the production function.

The primary factors facilitate production but neither becomes part of the product (as with raw materials) nor becomes significantly transformed by the production process (as with fuel used to power machinery).

Land includes not only the site of production but also natural resources above or below the soil. Recent usage has distinguished human capital (the stock of knowledge in the labor force) from labor.

Definition of Factors Of Production 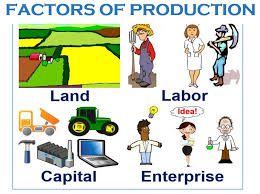 The modern definition of factors of production is primarily derived from a neoclassical view of economics. It amalgamates past approaches to economic theory, such as the concept of labor as a factor of production from socialism, into a single definition.

Land, labor, and capital as factors of production were originally identified by the early political economists such as Adam Smith, David Ricardo, and Karl Marx.

Today, capital and labor remain the two primary inputs for the productive processes and the generation of profits by a business. Production, such as in manufacturing, can be tracked by certain indexes, including the ISM Manufacturing Index.

Land has a broad definition as a factor of production and can take on various forms, from agricultural land to commercial real estate to the resources available from a particular piece of land.

Natural resources, such as oil and gold, can be extracted and refined for human consumption from the land. Cultivation of crops on land by farmers increases its value and utility.

For a group of early French economists called the physiocrats who pre-dated the classical political economists, the land was responsible for generating economic value.

While the land is an essential component of most ventures, its importance can diminish or increase based on industry. For example, a technology company can easily begin operations with zero investment in land. On the other hand, the land is the most significant investment for a real estate venture.

Labor refers to the effort expended by an individual to bring a product or service to the market. Again, it can take on various forms. For example, the construction worker at a hotel site is part of labor as is the waiter who serves guests or the receptionist who enrolls them into the hotel.

Within the software industry, labor refers to the work done by project managers and developers in building the final product. Even an artist involved in making art, whether it is a painting or a symphony, is considered labor.

For the early political economists, labor was the primary driver of economic value. Production workers are paid for their time and effort in wages that depend on their skill and training. Labor by an uneducated and untrained worker is typically paid at low prices.

Skilled and trained workers are referred to as human capital and are paid higher wages because they bring more than their physical capacity to the task.

For example, an accountant’s job requires synthesis and analysis of financial data for a company. Countries that are rich in human capital experience increased productivity and efficiency.

The difference in skill levels and terminology also helps companies and entrepreneurs arbitrage corresponding disparities in pay scales. This can result in a transformation of factors of production for entire industries.

An example of this is the change in production processes in the Information Technology (IT) industry after jobs were outsourced to countries with a trained workforce and significantly lower salaries.

In economics, capital typically refers to money. But money is not a factor of production because it is not directly involved in producing a good or service. Instead, it facilitates the processes used in production by enabling entrepreneurs and company owners to purchase capital goods or land or pay wages. For modern mainstream (neoclassical) economists, capital is the primary driver of value.

As a factor of production, capital refers to the purchase of goods made with money in production. For example, a tractor purchased for farming is capital. Along the same lines, desks and chairs used in an office are also capital.

During an economic contraction or when they suffer losses, companies cut back on capital expenditure to ensure profits. During periods of economic expansion, however, they invest in new machinery and equipment to bring new products to market.

Mark Zuckerberg assumed the risk for the success or failure of his social media network when he began allocating time from his daily schedule towards that activity. At the time that he coded the minimum viable product himself, Zuckerberg’s labor was the only factor of production.

After Facebook became popular and spread across campuses, Zuckerberg realized that he needed help to build the product and, along with co-founder Eduardo Saverin, recruited additional employees.

He hired two people, an engineer (Dustin Moskovitz) and a spokesperson (Chris Hughes), who both allocated hours to the project, meaning that their invested time became a factor of production.

The continued popularity of the product meant that Zuckerberg also had to scale technology and operations. He raised venture capital money to rent office space, hire more employees, and purchase additional server space for development.

At first, there was no need for land. However, as business continued to grow, Facebook built its own office space and data centers. Each of these requires significant real estate and capital investments.

Another example of entrepreneurship is Starbucks Corporation (SBUX). The retail coffee chain needs all four factors of production: land (prime real estate in big cities for its coffee chain), capital (large machinery to produce and dispense coffee), and labor (employees at its retail outposts for service).

The company’s founder Howard Schulz was the first person to realize that a market for such a chain existed and figured out the connections between the other three factors of production.

While large companies make for excellent examples, a majority of companies within the United States are small businesses started by entrepreneurs. Because entrepreneurs are vital for economic growth, countries are creating the necessary framework and policies in order to make it easier for them to start companies.

The definition of factors of production in economic systems presumes that ownership lies with households, who lend or lease them to entrepreneurs and organizations.

But that is a theoretical construct and is rarely the case in practice. With the exception of labor, ownership for factors of production varies based on industry and economic system.

For example, a firm operating in the real estate industry typically owns significant parcels of land. But retail corporations or shops lease land for extended periods of time.

Capital also follows a similar model in that it can be owned or leased from another party. Under no circumstances, however, is labor owned by firms. Labor’s transaction with firms is based on wages.

However, collective good is the predominating principle in socialism. As such, factors of production, such as land and capital, is owned by workers.

While it is not directly listed as a factor, technology plays an important role in influencing production. In this context, technology has a fairly broad definition and can be used to refer to software, hardware, or a combination of both used to streamline organizational or manufacturing processes.

Increasingly, technology is responsible for the difference in efficiency between firms. To that end, technology, like money, is a facilitator of the factors of production. The introduction of technology into a labor or capital process makes it more efficient.

For example, the use of robots in manufacturing has the potential to improve productivity and output. Similarly, the use of kiosks in self-serve restaurants can help firms cut back on their labor costs.

Typically, Solow Residual or Total Factor Productivity (TFP), which measures the residual output that remains unaccounted for from the four factors of production, increases when technological processes or equipment are applied to production.

Economists consider TFP to be the main factor driving economic growth for a country. The more a firm or country’s total factor productivity, the more its growth.

Kindly use the comment box below for all your contributions.

You are also encouraged to kindly share this information with your loved ones if found useful enough as we cannot reach everyone at the same time. Thank you

Here are more business management books and related resources to assist you further:

The Complete 12-Step Guide to Starting a Business

9 Inventions That Will Make Your 2020 a Lot More Interesting

Top Technology Companies around the World and their Address

CERN is ready to unravel more secrets of the universe, decades after the God particle was discovered

The Complete 12-Step Guide to Starting a Business